I love my work. I love making something that reaches far beyond my hands and home and touches people in intimate and personal ways. More importantly, I love being able to share my work with young people and hopefully inspire them to follow their dreams. Back in the spring at the Reginald F. Lewis Museum, a young woman approached me about my work. We talked and I found out that she was a MICA graduate and a teacher. She invited me to come and speak with her students at some point and followed up a few months after we met. Yesterday I visited Mika and her students at Jubliee Arts Center here in Baltimore.

I became an artist because I had a mother who saw talent and nurtured it. She exposed me to art though summer art camps, trips to the library, trips to the museum, and thousands of dollars invested in art supplies throughout my teenage years. She then continued her support by allowing me to choose the college I wanted to attend and encouraging me to go ahead and apply for loans to finance my dreams. We weren’t rich by any means. My mother was a single parent and an educator. She made me a priority. She made my dreams a priority. She gave me the tools I needed to succeed. I was lucky. Not everyone gets to be so lucky.

Yesterday at Jubilee Arts I read Bird aloud and shared a slideshow of some of my early life including the very first drawing that won me attention, a copy of the magazine I wanted to create, the flute I played, the piano I wanted to be good at, but wasn’t, and some of the book series’s I read. From there I showed them my college work and talked about how I grew as an artist, but still wanted to be better. Moving on, I showed them a picture of my art homies in graduate school and told them how I began to become the artist I wanted to be through sharing and learning from my friends and community. The presentation then went into my books, how they are made, and how much work goes into making them. 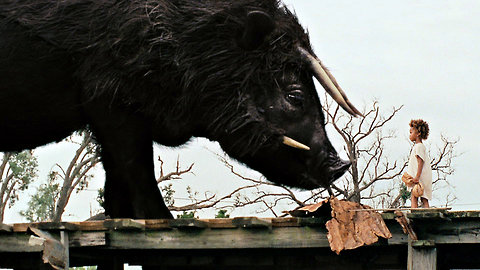 At one point in the conversation when I shared A Place Where Hurricanes Happen, one of the students asked me if I saw Beasts of the Southern Wild. I have, and before sharing my opinion, I asked her what she thought. This lovely young lady…around 15 or so, shared that she liked the idea that the people who lived in The Bathtub were happy with who they were and wouldn’t be forced to leave their homes for a perceived better life by the outside world. I agreed with that, but countered with the problematic idea I took away from the film that poor people were likened to wild animals. She then countered by saying yes, but the community was diverse so it wasn’t just about black people. True, but still, why does poverty have to sit in a box with filth, slovenliness, and drunkenness? I didn’t want her to think my opinions then negated her own, so I went on to end on a high note about the beautiful magical elements in the film that made it memorable and special.

This wasn’t a debate that needed concluding. I was just so thrilled to talk to young people who are thinking. Two young women who sat on the front row were interested and engaging. After politely sitting through my talk, they began to share their own hopes and aspirations of wanting to be fashion designers, writers, and artists who do it all. I was thrilled…absolutely thrilled.

The highlight of the evening came when I shared with the teens that I had just sold my first manuscript that I would be both writing and illustrating. One student raised her hand and asked, “Why do you want to write too?” Simply because I want to put stories and ideas into the world that reflect who I am and what I hope for others. But also, because if I don’t write my stories, who will? It is a privilege and an honor to use my artistic voice and imagination to contribute to and help shape my community as best I can. Ideas are powerful and I want to do what’s in my power to give to young people the very best ideas about who they are and can be. Lastly, because growing up reading Bible stories, I was taught to nuture and share all of my talents.

The Trayvon Martin verdict was just announced. In light of this and the recent voting rights ruling, we need all of the voices as we can encouraging our young people to walk with their heads held high.

The Parable of the Talents

At the end, we all gathered upstairs in the classroom for pizza and chit chat. The students really came to life then. Before leaving each student came over to me and gave me a hug, which surprised me a bit, but was more than welcomed. Mika Eubanks, the youth instructor who invited me, sat and chatted with for a few more moments about her own artistic journey and experience at MICA.  I encouraged her to see as much of the world as she could. She delightedly told me that she was already applying for her passport. I asked her if I could come back to Jubilee at some point to do some location drawing with the students. It will be an honor.